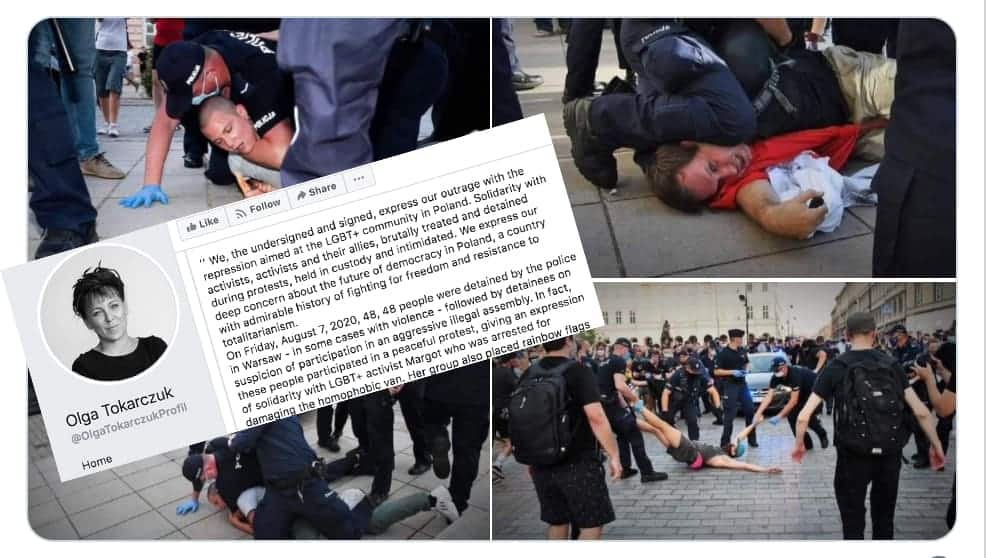 Photos from yesterday’s (07.08) peacefull protests against homophobia/queerphobia in Poland. pic.twitter.com/A388OXPEU3

Ladies and gentlemen, I am sharing the content of the letter of solidarity and protest addressed to the President of the European Commission, Ursula von der Leyen.

«We, the undersigned and signed, express our outrage with the repression aimed at the LGBT+ community in Poland. Solidarity with activists, activists and their allies, brutally treated and detained during protests, held in custody and intimidated. We express our deep concern about the future of democracy in Poland, a country with admirable history of fighting for freedom and resistance to totalitarianism.

On Friday, August 7, 2020, 48, 48 people were detained by the police in Warsaw – in some cases with violence – followed by detainees on suspicion of participation in an aggressive illegal assembly. In fact, these people participated in a peaceful protest, giving an expression of solidarity with LGBT+ activist Margot who was arrested for damaging the homophobic van. Her group also placed rainbow flags on Warsaw monuments, including the figure of Christ.

These were not ′′ hooligans ′′ actions or ′′ provocations «, as the pro-government media claims in Poland, but rather desperate acts of resistance against the collapsing, homophobic hate speech. A damaged van is one of many similar vehicles spreading in Polish cities, outrageous content: equalizing homosexuality with pedophilia, indicating gay people as a source of diseases and a threat to children. Previous efforts to stop this well-financed campaign by legal means did not result.
The broader context of these events is the use of rhetoric aimed at LGBT+ during the election campaign by the president, politicians and the media, and the attack on the ′′ LGBT ideology ′′, accompanied by resolutions of numerous Polish communities announcing themselves ′′ LGBT-free zones «, allegedly in defense of families and children, as well as last year’s brutal attack on the Equality March in Białystok.

Homophobic aggression in Poland is increasing because it is strengthened by the ruling party that has made sexual minorities a scapegoat without caring for the safety and welfare of these citizens and citizens. Margot is de facto a victim of political repression, arrested for refusing to be humiliated.

We call on the Polish government to stop targeting sexual minorities, to stop supporting organizations promoting homophobia, and also to hold people behind illegal and brutal detention from August 7, 2020
We call on the European Commission to take immediate steps to defend fundamental European values – equality, non-discrimination, respect for minorities – which have been violated in Poland. LGBT+ rights are human rights and should be protected as such.»